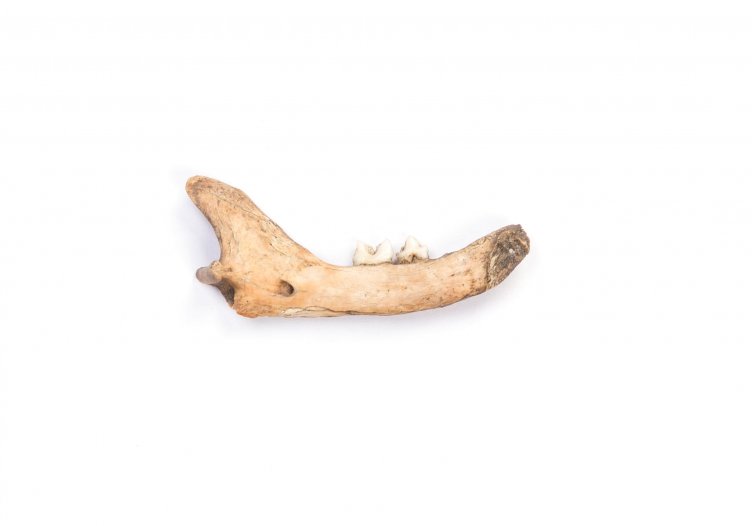 Vulpes vulpes, the Red Fox, has overtaken the Grey Wolf as the most widespread canine in wild Britain.

This is the jawbone of a fox kit who, along with all its siblings, was decapitated by an incoming adult male, killing the babies to shorten the time before the resident vixen becomes fertile again. This massacre means that he can then sire his own kits, marking his territory as the new king of Bethnal Green Nature Reserve.

Foxes dig holes to raise their kits in, and this has been the source of much of the treasure in this collection. The depth they dig has meant that I’ve found much older and more diverse objects on site.

This jawbone shows how the fox’s baby teeth are beautifully shaped and pointed in order to slice and extract the goodness from fruit, bugs, rodents and birds, carrion, fried chicken and kebabs –and whatever else they can find on the streets and backyards of the city.

Urban foxes have evolved to live with human communities but they are not tame. These teeth remind us that nature is unsentimental, ‘red in tooth and claw’ no matter how much we try to anthropomorphise or assign them human emotions or ethics.

Foxes are often scapegoats, the only wild carnivorous animal approaching our size to live among us. The ‘cunning’ fox threatens our spurious supremacy in the world, we’re afraid of their wildness and aloofness, their success and independence - so we blame them for being predators, forgetting our own crimes against the natural world.